Kill yourself prods proudly presents:
Kill037:Nefarious Spirit:S/t mcd
Cold,grim &mystical Black metal that manages to sound gloriously 90ies without being retro or derivative.Opus nocturne era fans of Marduk and De mysteriis dom Sathanas zealots have probably found a revelation and a piece of music that is fresh in its blackness and mystique. This is a cd version of their sold out tape that received acclaim by the underground scene.
Available for 8 euro postpaid.
Contact: embrace_thorns@yahoo.com
sample: https://www.youtube.com/watch?v=CWxHQRaRMNQ
​

Kill036: ORDEAL's Self-Title Mini-Album
​ Out Now On CD Format!!!
A Co-RELEASE Between METAL THRONE PRODUCTIONS And
KILL YOURSELF PRODUCTIONS,,
Ancient DOOM/DEATH In The Vein of Old [PARADISE LOST,DECOMPOSED,THERGOTHON.EVOKEN].

OUT NOW! on Kill Yourself Prods.
KILL007RE: EMBRACE OF THORNS:...for I see Death in their Eyes... Re-issue cd+bonus track.
Ten years have passed since the recording and the original release of EMBRACE OF THORNS' debut fullength.Initially released as a cassete lp in 2007 and hailed upon release by the thriving underground metal underground ,f.i.s.d.i.t.e still retains its barbaric and oppressive aura.Militant & pummeling War drums are uniquely accompanied by a suffocating guitar tone,Bulldozer bass and Devilpig's vocalization which functions as a catalyst that makes the record even more unholy,claustrophobic and desperate.
This re-issue will feature the "Annihilation Scrolls" track as a bonus for the first time on cd.That track was recorded back to back with the album and was included in the "litanies of Sacrilege" vinyl compilation.
To make this release unique,new artwork was submitted by Sgt.Vomitor who had inked the original LP released back in 2008.
Get your copy now for 8 euro plus postage
contact/orders: embrace_thorns@yahoo.com 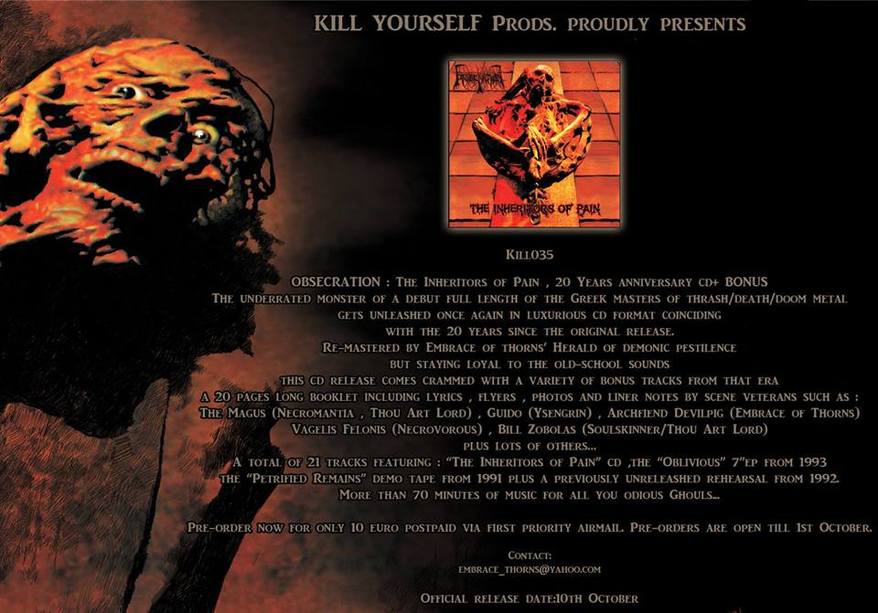 OUT NOW!!!
Kill035:OBSECRATION: The Inheritors of Pain 20 Years anniversary cd+ BONUS
The underrated monster of a debut full length of the Greek masters of thrash/death/doom metal gets unleashed once again in luxurious cd format coinciding with the 20 years since the original release. Re-mastered by Embrace of thorns’ Herald of demonic pestilence but staying loyal to the old-school sounds, this cd release comes crammed with a variety of bonus tracks from that era, a 20 pages long booklet including lyrics, flyers, photos and liner notes by scene veterans such as: The Magus(Necromantia, Thou Art Lord)Guido(Ysengrin) ,Archfiend Devilpig(Embrace of Thorns),Vagelis Felonis(Necrovorous),Bill Zobolas(Soulskinner/Thou Art Lord) plus lots of others…
A total of 21 tracks featuring : “The Inheritors of Pain” cd ,the “Oblivious” 7”ep from 1993, the “Petrified Remains” demo tape from 1991 plus a previously unreleashed rehearsal from 1992.
out now for 10 euro postpaid via first priority airmail. Labels/distributors get in touch for wholesales and trades .
Contact:embrace_thorns@yahoo.com
Official release date:10th October


still hot:
KILL034:EMBRACE OF THORNS:Darkness Impenetrable
The fourth album of those morbid metal diehards is now edited on tape format.200 COPIES 2-sided covers,pro-tapes.Released together with From Beyond prods.

KILL YOURSELF Prods. proudly presents:
KILL033:SARVARI:Arxaiolatria cd
Emerging from Southwestern Hellas the mystical entity of SARVARI has been lurking in the deepest pits of the underground since 2005.”Arxaiolatria” is their second fullength in eleven years and is nothing short of pure Black metal excellence. The aura on ancient pagan mysticism relives once more. The production and the execution of the material brings memories of the primordial recordings by legends such as: AGATUS,TATIR ,VARATHRON & KAWIR and the overall result is immersed in unmistakable Hellenic grandeur…

Sample:
https://soundcloud.com/lultimo-squallo/sarvarithe-return-of-the-ancient-goat
This is the return of the ancient GOAT!!!

KILL032:INFERNAL CURSE:Apocalipsis cd 8 euros plus postage
Released in conspiracy with
Iron Bonehead Prods. (Germany) / Obliteration Rec. (Japan) /Austral Holocaust Prods. (Peru)
Radical Black Death Violence!! Support the real Underground !!
From the deepest pits of Argentinean underground INFERNAL CURSE return with a bloody vengeance.Their second fullength is a punishing slab of primordial DEATH metal fury.Having utilized the virtues of analogue sound once again, INFERNAL CURSE managed to came up with a record that stems from the very first era of Death metal without sounding derivative,retro or shallow.Apocalipsis is a masterful amalgam of death,thrash & black metal cloaked in a charmingly obscure atmosphere...
For fans of old SEPULTURA,VULCANO,MORTEM(Nor),NECROVORE,MASACRE,EXPULSER,SEXTRASH
check out "obituaries' track:
https://www.youtube.com/watch?v=-qG-C6C_SDU 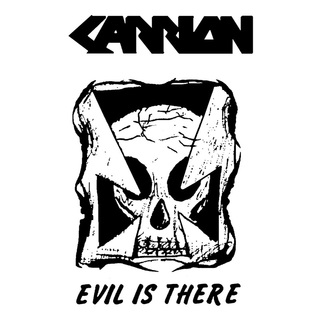 kill031:CARRION:Evil is there demo lp
​
CARRION emerged from the eclectic Swiss underground in the early 80ies and performed punishing teutonic speed thrash metal in the vein of gods like ASSASSIN,DARKNESS & DEATHROW.Their sole album before changing name to POLTERGEIST entitled "Evil is there" from 1986 is a true cult gem of 80ies metal.We are proud to unleash their 1985 demo which carries the same name as their album and is no less of a ruthless killer.
Limited edition of 250 copies on black wax.Co-released by Weird Face prods. ,Kill Yourself prods & Blood & Iron recs.SOLD OUT
grab your copy now for 15 euros plus postage
contact:embrace_thorns@yahoo.com

kill028:Αίμα:σάρκα 7" ep
limited to 300  numbered copies,250 on black vinyl & 50  on red,blacks available for 6 euros plus postage . Reds available STRICTLY from our mailorder for 7 euro each plus postage.

Another bloody testimony of the ancient Hellenic Black metal scene, the sole demos of CTHONIUM & OSCULUM INFAME respectively, are now exhumed from the dark past and destined to haunt the living.
The master for this release was FULLY approved by the band.It was sourced by Archfiend Devilpig’s tapes & got digitally transferred by Herald of Demonic Pestilence(EMBRACE OF THORNS) this material sure doesn’t sound perfect but carries the authentic Black metal spirit of the early 90ies intact…

The booklets include ancient bios,flyers,interviews from legendary zines of the past like:BLASPHEMOUS,STREGOICA,BLOKONG,UNHOLINESS,APOCRYPHAL CATALEPSY plus a very in depth interview with Odes from Absu & Chords from Hell conducted by Archfiend Devilpig exclusively for these releases…

Avalable for 12 euros each including postage worldwide.